It is with great sorrow that we learned about the passing of Asma Jahangir on Sunday, 11 February.  A prominent lawyer and renowned human rights defender, Asma was at the forefront of human rights movement in Pakistan, often taking on the most dangerous and challenging cases despite great personal risks. She passed away because of a heart attack at the age of 66 in Lahore. 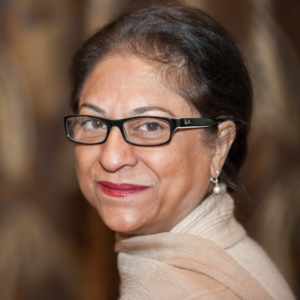 Her legacy will forever inspire Pakistani activists and the global human rights community. She was an outspoken defender of the weakest and most vulnerable, including children, women and minorities, and a firm advocate for the rule of law.

Asma was one of the founding members and a chairwoman of the Human Rights Commission of Pakistan (HRCP). She also served as UN Special Rapporteur on Extrajudicial, Summary, or Arbitrary Executions (1998 – 2004) and as Special Rapporteur on Freedom of Religion and Belief (2004 – 2010). Asma received numerous international awards for her work as a human rights advocate. In 1995, Asma received the Martin Ennals Award, highlighting her courage at the moment of great personal risk.

HURIDOCS was fortunate to have had the opportunity to work with Asma and her colleagues. At the initiative of Asma Jahangir, the Human Rights Commission of Pakistan (HRCP) and HURIDOCS co-organised a training workshop on human rights documentation for its staff and other human rights defenders in 1989. The two organisations had been in contact to discuss issues related to human rights information management. It was a great honour for us to support HRCP and work with Asma.

We offer our deepest condolences to her family, friends, colleagues and everyone for whom Asma was an inspiration in the struggle for human rights.

View all posts by Anastasia V →